I made this drawing because I keep forgetting how to represent frequencies. Here you can see the frequency spectrum of some APT signal sampled at 11025Hz, the peak is the AM carrier at 2400Hz, and everything wraps around because we use discrete signals.

I did something like what you can see here but with a easier (and slower) implementation. 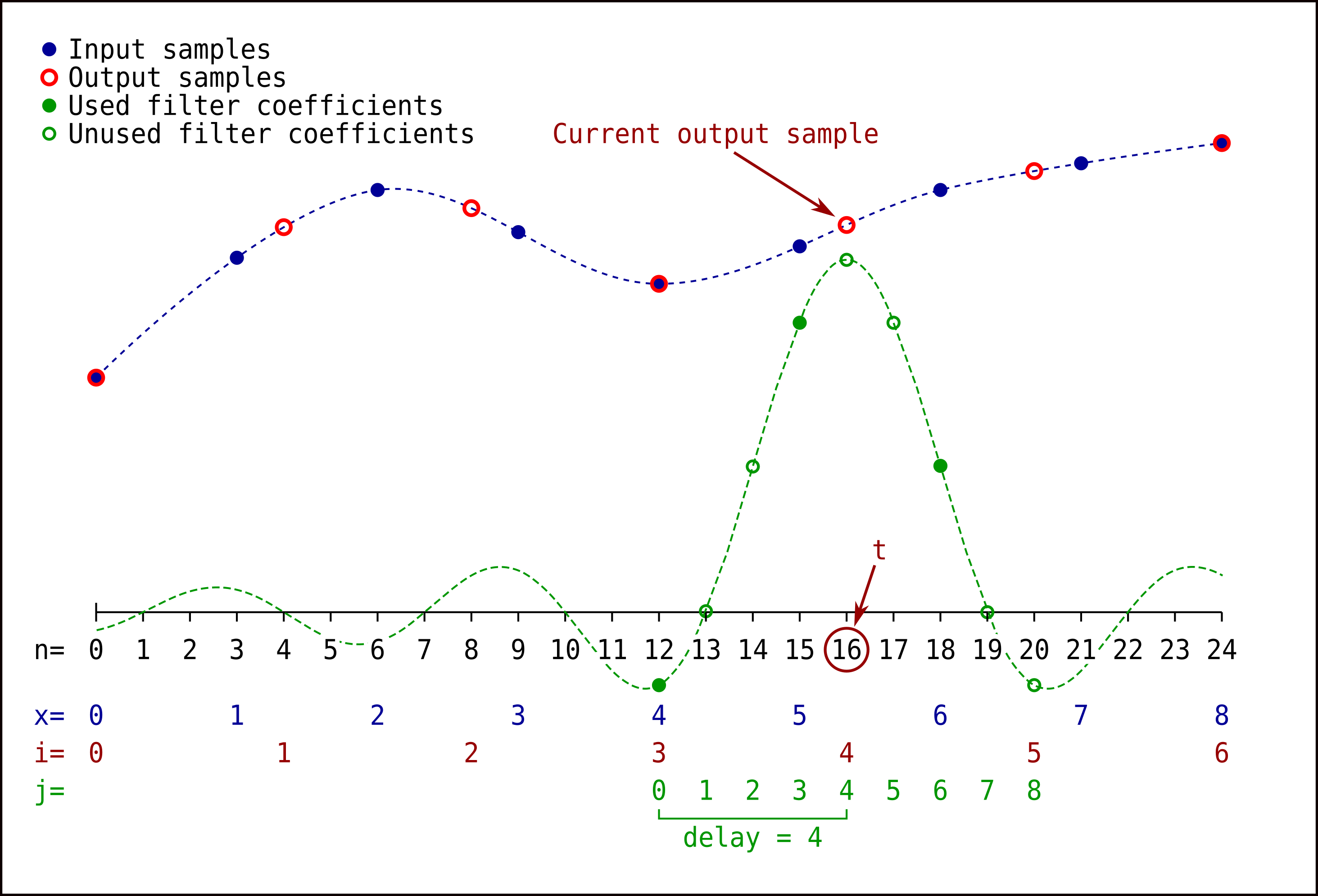 For each output sample, we calculate the sum of the products between input samples and filter coefficients.

Then I found a very fast demodulator implemented on pietern/apt137. For each output sample, you only need the current input sample, the previous one and the carrier frequency:

I couldn’t find the theory behind that method, looks similar to I/Q demodulation. I was able to reach that final expression (which is used by pietern/apt137) by hand and I wrote the steps on extra/demodulation.pdf. I think it only works if the input AM signal is oversampled, maybe that’s why I can’t find anything about it on the web.

Here you can see some examples.

The first signal is the APT signal after AM demodulation, the next three are results of the cross correlation using slightly different samples, they should have peaks where the sync frames are in the original image.

Here you can see a close up of a peak.

Read first below what does the telemetry mean.

The hardest part is to determine where the telemetry wedges are located. Horizontally, the telemetry bands are always on the same place. By looking at a decoded image I get:

Now the problem is to know where the telemetry starts vertically, I thought of doing some kind of edge detection but then I realized that we can take advantage of the fact that wedges 1 to 9 are always the same. So I use the following sample:

The variable part contains temperatures and a channel identifier. To determine the start of the telemetry frame I cross correlate the received telemetry band against that sample (excluding wedges 10 to 16). The peaks of the cross correlation show where the frames start.

To avoid noise I do the following:

The following image shows an example: 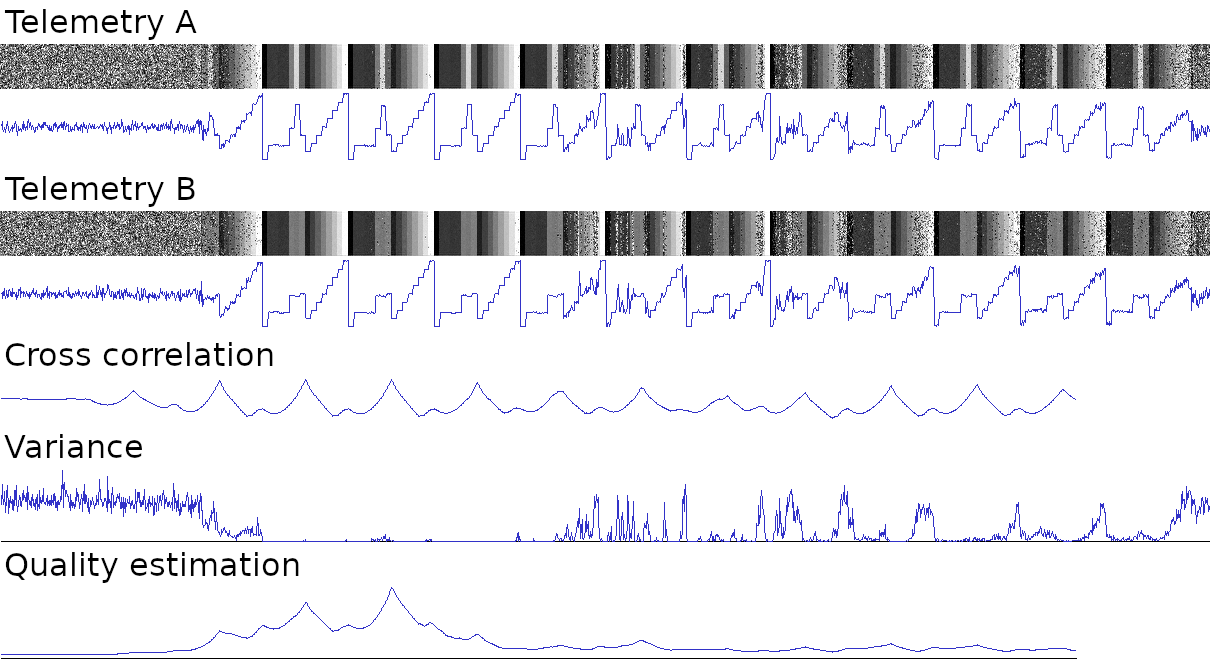 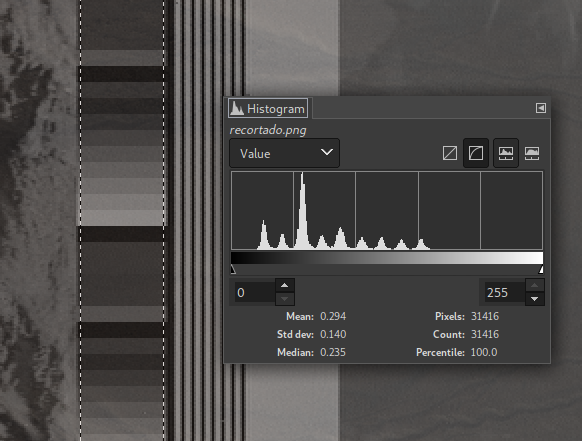 Useful for contrast adjustment but I’m not doing this because I can’t know the value of wedge 16 (channel ID).

It is necessary to know the position of the satellite when the recording was made, so a TLE is loaded and the satellite-rs library is used.

To draw the map, a shapefile (.shp) is loaded with the coordinates of every line we need to draw over the image. The coordinates are (latitude, longitude) pairs and we need to convert them to (X, Y) image coordinates. Now I’m going to try to explain this conversion.

I never tried to do math over a sphere before, I made lots of mistakes and I managed to make it work but I’m not sure if my calculations are good approximaions. It is very easy to make mistakes assuming things that happen in euclidean geometry (e.g. here triangles do not add up to 180°). Looks like the equivalent of a straight line is a geodesic, and I found these Napier’s rules for right spherical triangles (triangles of geodesic lines with a 90° angle).

See the drawing for an example of a northbound image taken near the north pole. The orange line is a coastline to be drawn.

The blue lines and meridians (gray lines that go through the north pole) are geodesics. The parallels (gray lines othogonal to meridians) and the red satellite track are not geodesics (so I can’t solve triangles with them).

The red satellite track is almost a geodesic, so I just use the geodesic that goes through the start and end points as an equivalent of the image Y axis. The X axis is equivalent to another perpendicular geodesic.

Using the Napier’s rules for right spherical triangles from Wikipedia we can get the lengths a and b which are equivalent to Y and X in image coordinates. A conversion from degrees to pixels is needed, it depends on the resolution of the image.

At this point, there is a slight offset on the X axis because we used the blue geodesic instead of the red satellite track. The fix I found is to:

It is a standard histogram equalization. In false-color images, the RGB channels are converted to the Lab color space and the equalization is made only over the L (brightness) channel leaving colors unchanged.

The sliders in the GUI will modify the brightness values before they are used to look-up the palette. For example, by moving the first two sliders, the channel A values originally in the range 0-255 can be mapped to a range of 30-189. This will produce that the colors obtained from the palette will be different, and this can be used to manually fix when ground is confused with water.

Here you can find more information about the included palettes. Open the palettes with an image editor to better understand them.

There are different imaging sensors, named as Channel 1, 2, 3A, 3B, 4 and 5. Two of them are chosen by the satellite operators to be shown on two portions of the image, named Channel A and B.

The Channel A sync frame and the Channel B sync make up the distinctive “tick-tock” sound on the received APT audio signal.

Both Channel A space and Channel B space have a scan of deep space using the same sensor used to image earth. If the sensor is sensible to visible light this part looks black (Channel 2 and I guess Channel 1 too). The infrared channels represent cold as white, so this part of the image looks white instead (Channel 3A, 4 and I guess that 3B and 5 too).

The telemetry bands have calibration data and information about the current channel being transmitted. Bars/wedges 1 to 9 are used for contrast adjustment and are fixed, wedges 10 to 16 can change because they show temperatures used for infrared images calibration.

Channel A is the left part of the image, channel B is the right one. Each one can show any of the following sensors (also called channels).